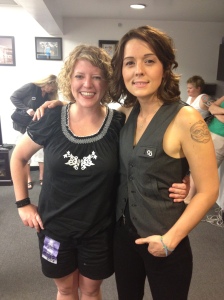 I’ll use any excuse to re-run this pic.

Yes, I still have an iPod.

But anyway, the good news is that Brandi (we’re on a first-name basis since I’ve interviewed her twice and met her two other times) is releasing a tribute album of The Story in which her favorite musicians and bands have recorded covers of the 14 songs.

I’ll let Rolling Stone explain it better than I can, but basically it’s cool musicians singing Brandi’s songs! Dolly Parton, Adele, Pearl Jam, Jim James, the Indigo Girls … shall I continue? The full list can be found at the above link, and let’s just say I’ll be waiting in fangirl anticipation for it to drop on May 5. It also benefits the War Child UK charity, which makes it even that more special.