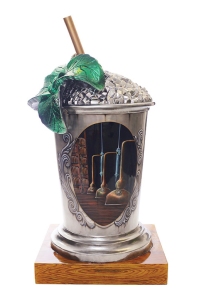 OK, everybody is in an uproar around here about statues of Confederate soldiers. I actually had no idea that white man on a horse near Cherokee Park was from the Civil War — I just liked the horse.

I have a suggestion, however. Let’s remove the thing and put up this dandy Mint Julep in its place — or one like it. That way, nobody will be angry, it’ll commemorate our bourbon heritage and it’ll look cool.

You can’t change the past, but you sure can tidy up the present to make things better for the future. Or something like that.

We can even put Christmas lights on it in December. And maybe a witch’s hat for Halloween.

The options are limitless.