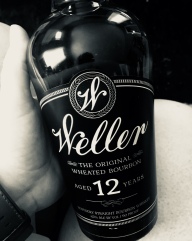 Well, this weekend I ended up sacrificing sleep for bourbon. I showed up with 1,000 other yahoos at Total Wine Saturday morning at 5 a.m., and quickly realized there were way more than 600 people in front of me.

They were only passing out 600 tickets.

So my bourbon buddies and I took our chairs, bloody marys and coffee to the Liquor Barn in Middletown, where they were also supposed to be setting out hard-to-find bottles when they opened at 9 a.m. We were 7, 8, 9 and 10 in line — and we all walked away happily with a bottle of Weller 12.

Had I gotten up that early and not returned home with some loot, I would have been a cranky pirate. But thankfully it paid off.