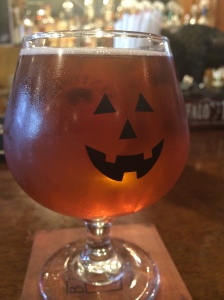 Tried the Kentucky Pumpkin Barrel Ale at Bearno’s Highlands last night, only because they let me keep the cute glass. I generally avoid vegetables in my beer, especially pumpkins. I loathe all things pumpkin — pie, spiced lattes, ice cream, wallpaper. But this strong brew (10% abv) packs a punch and doesn’t reek of that horrid pumpkin taste. Instead, there are hints of cinnamon, nutmeg and allspice, as well as bourbon.

2 thoughts on “Today’s Reason To Drink”