Sometimes my job is extremely taxing, and sometimes I get to taste seven mint juleps. Last night was the latter, and I was humbled to be a selected Rose Julep Contest judge at the annual Derby Festival/Four Roses “Festival Unveiled” event.

I — along with four other judges, including the Bourbon Babe — sipped and scored all seven takes on the classic mint julep. We judged the cocktails based on aroma, presentation, creativity and taste. The winner was Colleen McCarthy-Clarke from Martini Italian Bistro, whose “Rosé Runner” added a twist of rhubarb syrup to the mix, along with procecco, mint, lemon and rhubarb bitters … oh, and Four Roses Small Batch, of course. It was delicious and will be available at Martini on Monday.

McCarthy-Clarke also won the People’s Choice award, which ought to be reason enough to go try it yourself.

Now I am ready for spring to take hold of this city and commence the Derby fever. Mint juleps for everyone! 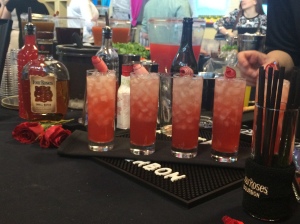