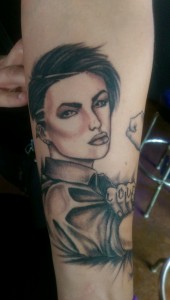 Too soon to ink Ruby Rose?

Hanging around hoards of lesbians, you get used to seeing thousands of tattoos, funky hairdos, chain wallets, backward hats, beat-up Chucks and drama. But this tattoo took the cake at Columbus Pride last weekend.

Fresh-faced Stella Carlin from this season’s “Orange is the New Black,” played by Australian actress Ruby Rose, inspired this gal so much, she decided to permanently ink her onto her arm. Granted the actress is hot, but we don’t even know if she’s returning for another season.

Maybe this woman took the idea of a vision board to heart and made it permanent. As in, “I will not stop plowing through women until I find a girlfriend who looks like this!”

Lesbians are nothing if not impulsive, so I can’t say I’m surprised. But for the record, I’m still on Team Alex.