Welcome to the third Tasteless Tastings installment, which is exactly what it sounds like: tasting notes from the riffraff. If you follow the liquor industry to any capacity, you probably have come across snooty tasting notes from classy people who make the new spirit sound more like a science experiment than something you consume for fun or to forget the world around you. I want to shoot gayly forward from the hip and tell you how it really tastes. So each time the nice mailman brings me a sample to try, I’ll gather up some friends and we’ll have a candid, lively and unpolitically correct discussion about said sample. So let’s do it …

What the hell is it?: It’s beer … flavored beer, of course! The cream soda is an ale that is aged on real vanilla beans during the brewing process; the sweet tea is an ale aged with real black tea leaves. It’s fizzy, sweet and (I believe) delicious.

Why do we care?: Both products should be making their way to the Louisville market soon. If you’re tired of beer and the same-old, same-old, these might give your taste buds a quick pick-me-up.

Give me the nerdy numbers: Both products are 5.5% ABV, and there is no caloric content on the bottles, unfortunately. I’m guessing they have a lot of sugar, but we’re not worrying about that at the moment, are we?

What do we think?: I didn’t interject too much this time during the candid and lively discussion because I was too busy sipping and laughing. I think as an alternative to beer, these products are quite tasty, but I’m not sure I could have more than one in one sitting unless they were used as a mixer for a cocktail. Both were very sweet and made your spit thick — like when you eat a couple Starbursts or a handful of Skittles.

Here’s what the group thought … 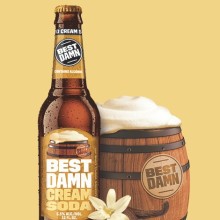 Tracy: It’s not bad.
Britany: I like beer — I don’t want to count this as beer.
Tracy: It’s sugary.
Britany: Tastes like burnt sugar — like it has a caramelized kind of flavor to it, but it went too far.
Cara: Tastes like buttercream icing.
Sara: Tastes like Grandma?
Erik: I wouldn’t order it at a bar, but after two days of drinking, and it’s Sunday … Sometimes water just doesn’t cut it. This might work.
Britany: I’m over-salivating to try and make it go away.
Cara: I could drink this and not be upset.
Erik: If you could get some bourbon to mix with it, it might work.
Cara: It’d be good on ice cream.
Erik: A bourbon float!
Tracy: It’s making me burp a lot.
Britany: That’s your body rejecting it!

(We added Jack Fire to Britany and Cara’s samples.)

Cara: It’s not terrible … it balances it out nicely. It feels like I’m 18 and drinking for the first time.
Britany: It’s Big Red gum. I can taste the aluminum foil! Now Big Red gum has some relation to Big Red soda in my brain.
Tracy: I don’t think I could drink a whole one.
Cara: I think it would be good in a cockital, like a Best Damn Cream Soda Float.
Erik: Or with a cheeseburger.
Sara: I think there are people who would enjoy this, they’re just not in this room.
Cara: If I didn’t know what a good drink is, I would like this.

Cara: It smells like roses!
Sara: I think it tastes a more like sun tea than sweet tea.
Tracy: Now this one I would drink on a Sunday. It’s less sweet.
Britany: Maybe at a baby shower that’s more like a brunch.
Sara: It’s like a Southern mimosa.
Cara: I’d like it to be a little less fizzy. (Puts an ice cube in her sample.)
Erik: It tastes like a holiday drink you left sitting around.
Cara: I don’t hate this one at all, and I don’t even like sweet tea.
Erik: I liked the Cream Soda one, but this one is a little better.
Cara: It makes me feel Southern … like I should be eating a finger sandwich and my colors are blush and bashful.
Erik: Her colors are pink and pink.
Britany: It might make a good Arnold Palmer if you added some lemonade.
Erik: Or Absoute Citron!
Cara: I bet the hangovers are horrible.
Erik: That’s just conjecture.